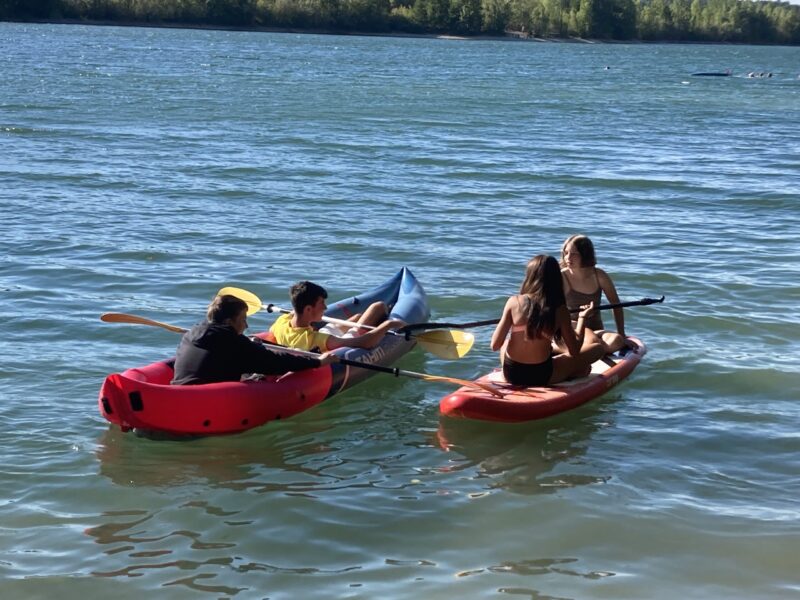 Holidays are never straightforward as a single parent. But as the kids get older – and moodier – the need to find human shields (aka friends) in order to enjoy the time away from home becomes more essential.

Nevertheless I was very proud of the three relaxing days in France I spent with just me and my two teens – sleeping late, eating well and messing about with basketballs and kayaks. I think it might be a first for time spent on holiday just the three of us without blow ups or moodiness from anyone (including me). Our secret was the other two weeks we spent with a crowd of friends. Adults were seriously outnumbered in my collection of single parent families and my boyfriends’ family on holiday this year –  but just the presence of other adults creates better behaved teens. As my friends’ 16 year daughter so clearly demonstrated.  When called up on being rude to her dad by another adult, she replied: ’Oh sorry – I didn’t know you were there!’ Six teenagers – one house – not a single meltdown. That is certainly not my usual experience of family holidays.

Going on holiday with a crowd is perhaps counter intuitive therapy for a depressed neuro-diverse 15 year old – but it worked wonders. So did allowing my son to take his X-box. I realise this may invoke all sorts of judgements from most sane families, but I have discovered that when you have a child that doesn’t fit the box you have to make up your own rules, regardless of what other parents think.

My son is transgender and covering up his body is just one of the ways he copes with daily life. Leaving his coat behind in the UK was a big step forward, going in a swimming pool or the sea is a seemingly unreachable goal right now. Something perhaps he can look forward to when he is an adult and can have the surgery he so desperately wants. And yet  – with relentless persuasion from friends he took the plunge and went to a waterpark ( in his hoody of course). My good friend and co-parent explained emphatically to the officious French waterpark attendant that he had a medical condition which means he can’t take his hoodie off. It didn’t result in an epiphany of swimming pool fun for the rest of the holiday, but it gave him an important experience. Showing him that you don’t have to be controlled by your fear. Without friends this never would have happened.

Having access to an Xbox was a retreat for my son when all the other kids were messing about in the pool. It also gave us outnumbered adults some peace in the evenings to enjoy French wine while the children played Fifa together. They even came downstairs sometimes and joined in our games of cards or came to watch the lightening storm overhead. More gratifying as it was entirely voluntary. It’s very easy as an adult to impose our own set of values on another generation. Is drinking alcohol so much better for you than gaming? I know it gives teens the same levels of enjoyment. And holidays are all about letting go. Leaving children to their own devices has gained new meaning for this generation, and I was happy to let them be on whatever device they had brought with them.

I have in fact discovered that teenagers are perfect companions on holiday if you give them enough legroom. They sleep until the afternoon – giving you the whole morning to do whatever floats your boat – for me it was swimming, yoga and reading. They love massive hyper markets and will gladly help with shopping trips if it means they can fill the trolley with sweets, doughnuts and sugary drinks (most of these I quietly removed at the till). And they get themselves to bed (usually after the adults) leaving grown ups more uninterrupted eating and drinking time.

My expectations were low as my last summer holiday was spent in the Scilly Isles coping with a teen who refused to leave a tent for two weeks.  Yet this summer, after ten months of not being at school and massive, overwhelming body issues from gender dysphoria, my son found himself in the crowd. He played cards, he went to a waterpark, he got in a kayak, he saw the milky way, he discovered basketball in a French park, he cycled with friends to a sports shop. Each one a milestone experience for a teen that at home rarely opens his curtains or leaves his bedroom. But most of all he had fun with our growing family of friends.

This summer was like the best kind of mindfulness retreat – one where you forget about the problems and worries that beset home life and focus on the simple things that feel good in the moment; eating good food, watching the stars and being with friends.

Her monthly blog exposes some of the myths of parenting and shares coping strategies to survive the challenges of neurodiversity and unstable mental health in teens.